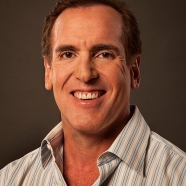 Posted by Barfbag on 2015 in Texas | Leave a comment

Brian Cuban is a best-selling author, lawyer and activist for so many subjects it’s amazing he has time to brush his teeth. He’s a spokesperson for male eating disorders and has been interviewed by Katie Couric, who is also a fucking awesome bulimic (I don’t know but would like to). Brian speaks up about addiction, depression, recovery, courage, cyber bullying, the Penn State sexual abuse scandal, plus he helps families who lost someone in the Iraq war through the Fallen Patriot Foundation. Oh and he’s also an advocate for medical marijuana. And if that’s not impressive enough he does “Brian Cuban’s Legal Briefs” on EyeOpener TV.

He’s honest and fearless but as you’ll see in his story below, which first appeared on CNN when his book, “Shattered Image: My Triumph Over Body Dysmorphic Disorder” came out, it took a long to get to that stage.

Brian’s story, like so many of these stories, began as an overweight kid. Then came the bullying and the hating. The starving. The failing, then the bingeing and purging to make everything numb. By the time Brian was at law school booze was his friend. Then came cocaine. Then rock bottom, as he says “They say your low point is always your best point if you survive it, and that’s true.”

Now Brian’s clean, healed and speaking up because guys don’t talk about having eating disorders. There’s even more shame and secrecy if you’re a guy because people don’t think starving and throwing up is something men would do. But they do.

Brian is the first guy on this site, which is awesome. I asked him a few questions:

What is the greatest lesson your bulimia taught you?

Secrecy is the enemy of recovery

What would you tell 11-year-old Brian?

He is loved. He is enough.

How’s your relationship with your body now?

I experience normative discontent like everyone else but I no longer obsess over it.

The number of boys with EDs is increasing – boys as young as 11 are getting them. How can we help them not go down the same path we did?

By encouraging families to educate themselves to, not being afraid to talk about what they learn and to understand that seeking help is not shameful, its courageous.

I used to stick my fingers down my throat after pigging out at the local buffet in Erie, Pennsylvania.

I just knew it made me feel good.

Throwing up made me feel normal. It told me I would finally be accepted and attractive the next day, that it would change the fat monster I saw in the mirror (at 6 feet 2 inches, I weighed about 180 pounds) to the guy who got the girl.

With each wretch, my mind flashed back to the fat 11-year-old boy who had his pants ripped off by classmates and thrown in the street, and who had been left to walk home in his underwear. But when the last of the pancakes were released from my body, and the evidence of my shame was cleaned from around the toilet, those thoughts disappeared for a few moments.

Then the guilt set in. The guilt of a “dirty secret” that I did not understand. I only understood that incredible, momentary high.

The subsequent guilt was as overwhelming as the high. I was a “man.” Men don’t throw up their meals. Men are not ashamed of their reflection in the mirror. Men don’t talk about their bodies, other than to boast of working out and large muscles. Men don’t have fat days.

Every day in my life was a fat day. In my mind I was completely alone, isolated by stigma and gender body stereotypes. To reveal myself would be to risk being called a “sissy” — to be made fun of and bullied as much as that 11-year-old child.

I had to have that high again to forget all that. I would continue to crave it for the next 27 years of my life: the life of a bulimic.

Through a 12-step, intensive therapy program, I was able to pull myself from the brink of the addiction and eating disorder abyss, make peace with my family and live a productive, happy life. Not everyone is that lucky.

The sad part is that the stigma and shame that once prevented me from seeking help in 1980 have not improved much over the last few decades. Many men still feel the need to stay silent about eating disorders. Despite the fact that 10% to 15% of people diagnosed with anorexia or bulimia are male, according to the National Eating Disorder Association, we still think it is a “women’s disease.”

It’s time for more men to step forward. We need strong voices to bring male eating disorders to the public’s attention and to open up treatment options. We need male celebrities to talk about these issues. We also need parents to talk about it with their kids and bust myths; nearly one-third of teenage boys try to control their weight by skipping meals, vomiting and taking laxatives, according to the National Association of Anorexia Nervosa and Associated Disorders.

I know that speaking out is easier said than done. It took me nearly 30 years to fight through my fear of ridicule, feminization and judgment before I finally told the world my secret.

But the biggest surprise about coming forward? When I did, I found only acceptance, caring and love. People wanted to help.

The societal stigma is, admittedly, something that will not go away overnight. But with every male who speaks up and lets others know they are not alone, more will find the courage to step up. Eventually I hope we reach a tipping point in which the media, including Hollywood, will portray men and women in a less gender-stereotyped manner.

There is power in numbers. As we step up, we will see more legislation introduced to provide better coverage for eating disorders. With that we will see an expansion of treatment options, which will lead to more funding and research for both male and female eating disorder sufferers.

Eventually we will have a better understanding of how to stop the crazy thoughts in their tracks and save lives.

Someone still has to be first. It can only happen one person at a time, one male at a time. Let’s start now.

You can find more about Brian and his fantastic work here.

– Or this good yarn in the Huffington Post about how magazines talk to girls vs boys. For girls it’s all about how to wake up pretty. And for boys it’s about how to become an astronaut. Pretty messed up that’s what that is.

Or here, women’s health is all about looking hot and for men it’s about how big your bacon is. 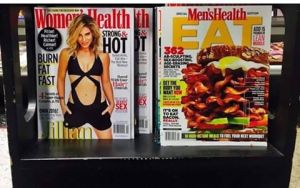 ← The Truth Teller The Plucky Changemaker →